Since today is Sunday and a new episode of The Walking Dead is on tonight, sharing the Spy’s zombie story he recently wrote seems quite appropriate. Well, it would probably be more appropriate to try and come up with a Sunday devotional. All Saint’s Day is in October, which is sort of about dead people…And zombies are dead…Ok, stop! Am I seriously trying to relate zombies to Christianity? I mean…that is pretty farfetched! 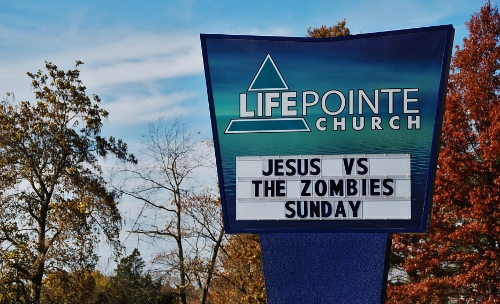 This is not our church. Though I’m not judging. And maybe I should’ve gone to service here this morning just for material! We attend a more conservative (Lutheran) church and the sermons rarely involve zombies. So I will spare you a Spy Garden attempt at Jesus vs. zombies. Though it is sort of tempting.

The only thing I changed in typing this up were minor spelling errors. And twice I inserted my own comments in bold, for effect.

The Killing of the Zombie Werewolf by the Spy, age eight (written in fall of 2013)

One night I was walking in the woods. Then I heard a crack! I froze. Then I heard a big “grrrrrr!” I was really scared but I wanted to find out what it was. I started to get closer to the sound and when I got really close I saw two big red eyes. Then I got so close it started to walk toward me. I stepped back and it got closer. I could not tell what it was. But I could tell that it was a really big creature. I started to run and then I heard a giant “rarrrrrrr!” I was so scared that I tripped over a rock and started to roll down a hill and then I fell off a cliff and landed on my back.

I woke up about three hours later. I was still wondering what the animal was. I remembered seeing two red eyes. I was thinking so hard about it I could not feel the pain from falling off the cliff. When the sun came up I saw enormous footsteps. I started to walk after the footsteps. When I saw where they ended it was next to a big dead tree. There was a big hole in the tree and red blood came from the inside of it. I jumped down in the hole. I landed on a brick and I passed out.

I woke up six days later. When I woke up I was in a cage at the bottom of the tree. I saw a huge furry animal. I was right under a full moon. Now I knew what it was.  It was a werewolf. I was about to yell for help until the werewolf saw me. It ran to the cage and slammed into it. It opened its jaws and bit into the metal. I tried to climb up the tree and then I fell. I saw that the metal was starting to break. The werewolf could almost get in. I started to climb the tree again and when I reached the top I got out and ran. I spotted a rifle and grabbed it and I shot the werewolf. It kept running after me but slower. Then it finally dropped to the ground. I went to the werewolf and shot it again.

I was feeling really good about myself. I went to the road and found a 1971 Dodge Charger. I punched through the glass and it had a giant sound. All you could hear was “Beeeep! Beeeeep! Beeep!” I saw someone coming really slowly. I saw some blood on his shirt and I was pretty scared but not that scared. I hopped in the car and I saw a screwdriver and I made it go into the key hole. The car was on and I stepped on the pedal and I went so fast.  I ran over the zombie and he went flying. I stopped the car and backed up and ran him over again. He was dead. His brain was splattered everywhere. Then I smiled and slammed the pedal.

I drove up a hill and at the top there was a million zombies. I turned around and they heard me. They went running slowly after me. I thought that they were so slow that I turned back around. I ran over about 600 zombies. I was laughing so loud that it was louder than the beeping.

HAHAHAHAHHAHAHAH The car alarm is still going off?!

After that I stopped at a camp site in Atlanta. There was a bunch of people there with guns. There had to be a thousand guns. I got out of the car and they were pointing guns at me. I stepped back to my car and got out my rifle. I pointed it at them and said, “Put down the guns.” They said no and pulled the trigger. They missed me and I shot one of them. They surrendered and said, “Sorry for trying to shoot you. But we’re going to kill you anyways.”

I turned on the radio and the news was on. I turned up the radio and put a song on. Then zombies came running after me but they were running slowly. I turned around and ran over them all. I stopped at a gas station and filled up the gas in the car. Then I went in the gas station and saw some food. I realized I was really hungry. I ran to the food and put it in my car. I was eating gummy worms. I was going 200 miles per hour. I had “We will rock you” on.

The front of the car was busted so I fixed it up and then I saw a truck. It had a plow with spikes on it. I took the plow and put it on the front of the Charger. Then I got in the car 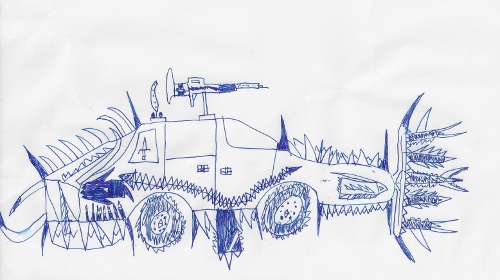 I imagine the 1971 Dodge Charger now looked something like this. 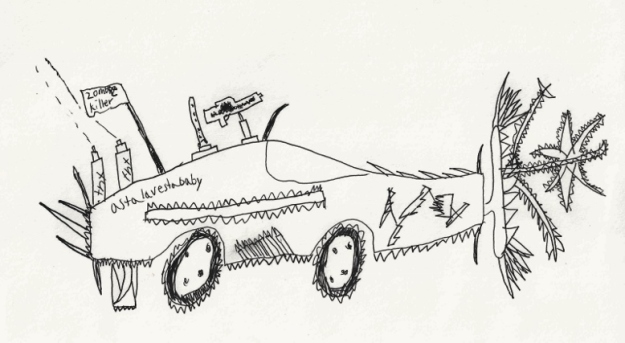 And hopefully now that infernal beeping of the car alarm had stopped! HAHhahaha

I climbed down the tree and I climbed through where the hole in the cage was. There was nothing but dead people. Then I left the tree and went home. The next day the earth was back to normal. There were no werewolves or zombies or zombie werewolves. There were a lot more people then when there was the zombie werewolf apocalypse. I was wondering why there were more people then when it all happened. I asked my neighbor, “Why weren’t there any people in the apocalypse?” They said because the apocalypse was so easy to survive that they all hid from everything that happened. I said “If it was so easy, why did you hide?” They didn’t answer and ran back home. I said, “Wait.” And they went faster. One of them went into a cage and threw meat in. I ran over but they were already gone and there was a zombie.

I went home. I turned on the tv and watched a movie then I heard a “grrgrgrgrgrgr” and I was so scared I ran for my life. I went out the door and got in my car. I stepped on the pedal and ran over a zombie. Then I got out of my car and saw 1,000,000, 000 zombies. I realized how many guns I had and got a mini gun out. I blew up a million zombies and there was still like 50,000,000 zombies left. The zombies were coming like a freight train off the tracks. I saw the giant bullets from the gun were gone. I went to get more ammo but there wasn’t any more left. I got out a bazooka and demolished all of them.

Then I went back to where I shot the zombie. It was gone. I went in the house next to the cage. The house was completely empty. I checked all over the house. There was no sign of a zombie. I went outside and looked in the woods and saw the zombie. It was split in half and burned. I saw that its guts were splattered all over. I wanted to know who the person who did it was. There was a track of car tires. I followed the tracks until they ended. They ended at a jail in the middle of the woods. There were zombies with their jaws off and their arms gone. They were in chairs and they were tied to scare crows. Then I heard a car coming there was a nuclear bomb attached to the top of it. Then I ran behind a bush and watched what he did. A guy got out of the car and he took the nuclear bomb out. He chucked the bomb and set it on fire. Then I ran for my life. I got to my car and pushed the pedal as hard as I could. I was going 1,000,000,000,000,000,000,000 miles per hour. I was slowing down the gas was almost empty. The then car stopped. I was next to a big giant pile of gas tanks. I got out of the car and filled up the car. I got back into the car and drove all the way to China. When I got there, there was 1,000,000,000,000,000,000 zombies. I took a machine gun and killed 1,000,000,000,000,000,000 zombies.

We had our yearly parent-teacher conference last week shortly after he wrote this. I met with his teacher and by that point had only skimmed through part of this story (which he wrote at school). I said “Uhhhhh yeah I think his story was pretty gory.” She cheerfully replied “Oh yeah, they were supposed to be scary stories, it’s all good.”

Then he got a glowing report on all fronts. Reading, math, behavior, all stellar.

I didn’t have to explain about why we let our kid watch The Walking Dead or his sense of humor or have any other awkward conversations about guns or gore. When you excel at academics and keep up social graces subversive expression is really quite charming.

It’s a lesson I learned in school and a lesson I’m glad to see the Spy is learning as well. 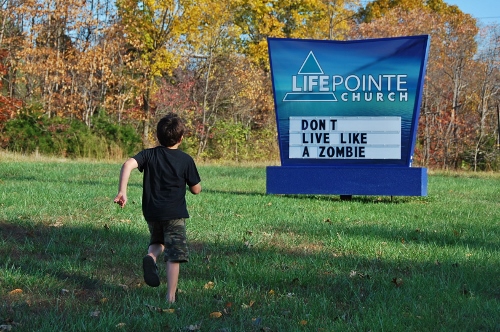 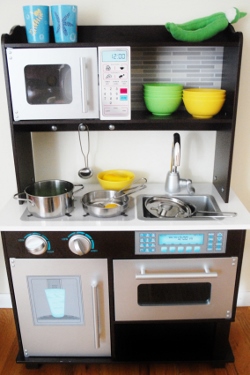 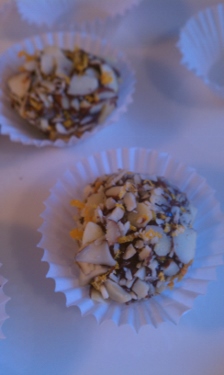 Put the following in a small stove-top pot with a handle:

Cook in small pot over medium heat until the mixture bubbles and starts to “pull away from the pan”.

Use a silicone heat proof spatula to ensure none of the mixture gets stuck to the bottom and burns. Stir continuously as it cooks.

Optional: Remove from the heat and stir in 1/2 Cup of semi-sweet chocolate chips, or chopped good dark chocolate (or white or milk if you prefer) and mix until it all melts.

In the case of a zombie apocalypse, everyone knows you need a good garden (see Gardening in a Zombie Apocalypse). The other thing you need are weapons. Very important to teach the Spy gun safety and for him to be a good shot. Imagine, a boy, alone, faced with a dozen walkers coming toward him and he didn’t know how to properly, safely and accurately shoot a rifle?! We can’t have that! 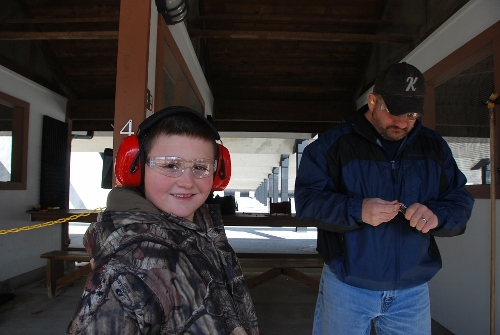 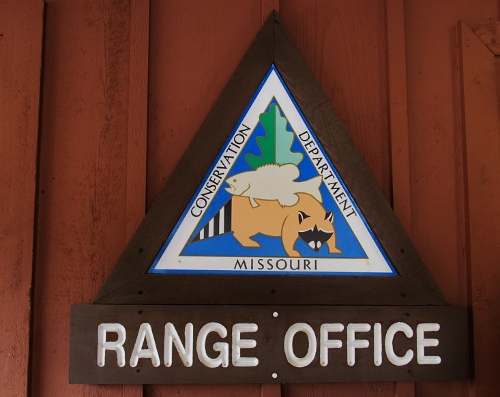 The Missouri Department of Conservation has many resources and education programs for all skill levels and ages. Hunting is very popular in our area, and while we do not hunt, we sure appreciate the people who do because otherwise the deer populations would be off the charts and wreak havoc on our ecosystem. 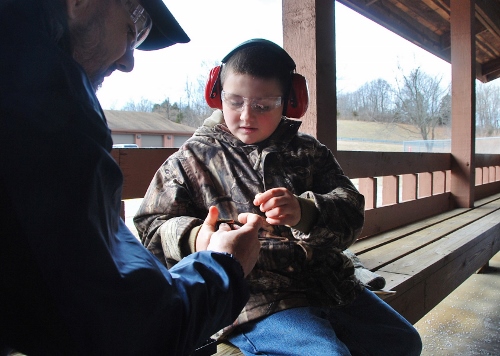 Smoochie and the Spy

Smoochie served in the Marine Corps (1992-1996) in the Infantry in a heavy weapons company, so he has lots of knowledge to share with the Spy! 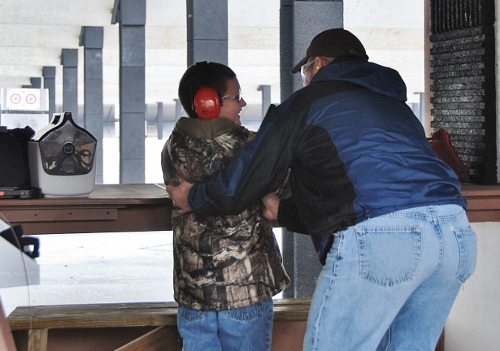 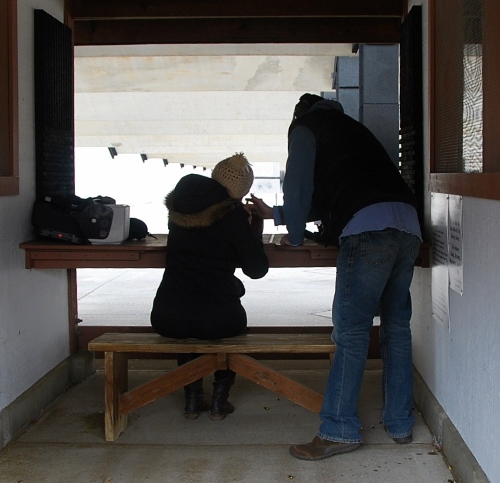 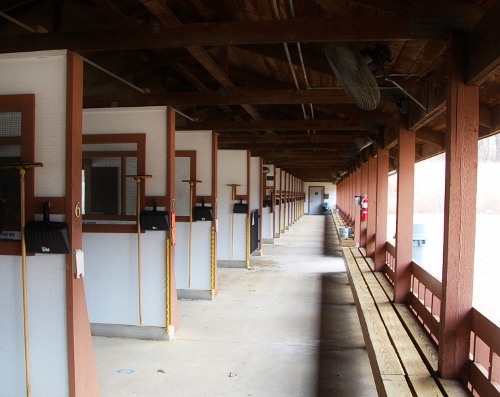 View of the row of booths 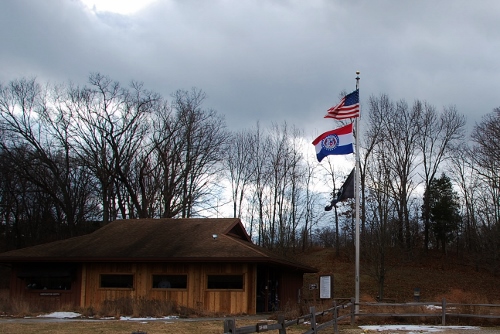 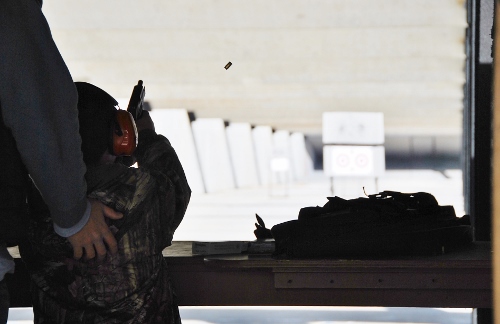 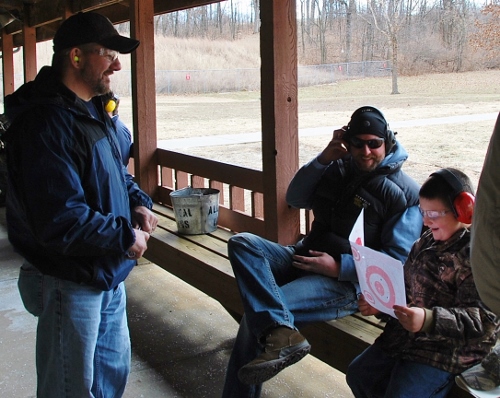 Checking out a target

Thanks to Aunt Spy for photographing the outing while Baby and I stayed home with: 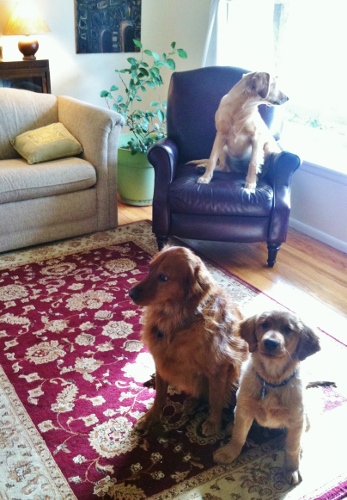 For more information on Jay Henges Shooting Range check out this page on the Missouri of Conservation Department’s website.